Oliver repeats the same tired and easily disprovable charge that SPD “cause riots”:

This “admit nothing, blame others for your actions” strategy is a well-established ploy to loudly and incessantly blame your opponents (SPD in this case) for your own misdeeds, while claiming victimhood for yourself, the true perpetrator. Only in the warped minds of disconnected-from-reality militants like those that punished Capitol Hill with nightly riots for weeks, would the police be to blame for defending the neighborhood against the lawless rioters nightly attacking it.

Pro-riot militants like Oliver would, of course much rather the police just evaporate and leave them to do whatever they wish to the defenseless city, up to and including massive property damage, burning down precincts, creating lawless anarchy zones and blocking ambulances from saving lives. In their minds, the mere presence of the police creates conflict and violence. The role of lawless rioters intent on burning, looting and sometimes killing are never considered, let alone their own role in encouraging the violence and anarchy. It must be the cops’ fault.

June 3rd 2020, Oliver communicated the protest movement’s goals to Mayor Jenny Durkan. Along with defunding the police and reallocating funds, the final key goal of militants like Oliver is “Amnesty for ALL protestors!” [original emphasis] In plain English, this conflates violent rioters with “Protestors” and demands legal immunity for both. When a rioter throws a molotov or shoots fireworks at law enforcement, they are not to be arrested, let alone charged. The resulting enticement to rioters who otherwise might stay at home for fear of a jail cell is easy to imagine.

Abolishment is the Only Solution

Oliver must never have called 911. They do not consider the police to be valuable in preventing crime and ensuring public safety.  Police, to them, are mere instruments of systemic racism, nothing more.

Oliver’s solution to problems within SPD (and all American police forces) is not merely to defund them but rather complete and immediate abolishment.

Reform is apparently a waste of time, only complete abolishment will do.

While fighting the good fight to abolish all police, Oliver spends their time sniping at any and all police budget line items. 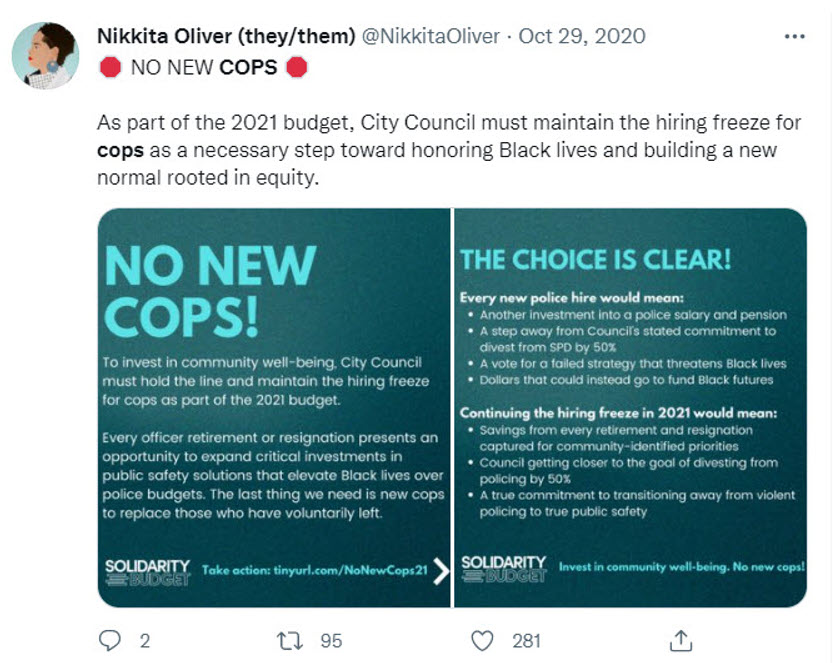 No expenditure on the police budget is worth keeping, it all must go.

It is interesting to examine Oliver’s rhetoric from a fiscal planning perspective. They insist that the police must be defunded, preferably “by 100%”, before any money should be spent helping alleviate poverty and otherwise improving society.

The obvious question any moderate resident would seem likely to ask is “Why can’t we have both?” Indeed, many Black Seattle residents have publicly asked why they cannot have community investment AND effective, professional policing. But these common sense perspectives are ignored by militants such as Oliver. These effective ideas on how to improve the city do not suit Oliver’s goals of societal transformation.

Educating the Next Generation of Militants

Oliver teaches a class at Seattle University on Police Abolishment.

This class no doubt supplies Oliver with a crowd of like-minded ideologues for them to test their police abolishment ideas out on. One wonders how many victims of violent crime, or small business owners driven out of the city by the chaos Oliver themselves contributed to, are included in the curriculum.

City Council candidate Nikkita Oliver and City Attorney candidate Nicole Thomas-Kennedy, if elected, would join other far-left ideologues at city hall in defunding, then abolishing SPD, stopping the prosecution of the vast majority of prosecutions of misdemeanor crimes and encouraging the release of those committing even violent life-threatening crimes. They would ceaselessly attack any public police force in the city until it was dissolved, then would likely attempt to outlaw private security, personal protection by residents and ultimately, attack the personal safety of any residents who dare to speak out against their goals of racially-oriented violent anarchy.